Good News!  The New Social Security System (SSS) member loan penalty condonation program for individual members will be launched starting on April 2. SSS Members such as employees, self-employed workers and voluntary members with overdue loans can settle their unpaid principal and interest without paying the full amount of penalties under a new amnesty program. I am so glad with this amnesty program and I believe that it will help a lot of delinquent members. 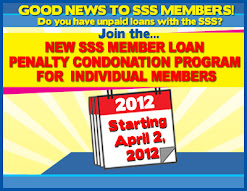 According to SSS President and Chief Executive Officer Emilio de Quiros, Jr., the amnesty “differs from SSS loan penalty condonation programs in the past” and its terms and requirements for applicants will depend on the type of delinquent borrower.

Deadline of application for the amnesty program : September 30, 2012 but beneficiaries of borrowers who passed away without settling their delinquent obligations can apply until March 30 next year.
source: sss.gov.ph